When the project of building a very small transceiver was accomplished 4 years ago, I still lacked lots of skills in setting up electronic circuits using SMD technology. The radio’s craftmanship  had been more or less defective to a certain degree (there were still lots of things to learn when using SMDs on Veroboards), the inside looked comparatively  “messy” and the performance was not sited within the premium league. Particularly the receiver was prone to IMD (NE612 as 1st mixer) problems when signals on the band were strong. But because I liked the outer appearance of the radio a total revision of the inside had to be performed.

The major changes that were used to improve the radio are:

Things that were not changed are frequency layout (14 MHz), the ATMega328P microcontroller (MCU) and cabinet size etc.

Even if the changes to the previous version are minor, I had to revise the schematic nearly completely (High resolution schematic):

The radio consists of 3 sections:

The MC1350 in the IF amplifier had been removed because the simplicity of the AGC hat to be improved. This is is because only one type of AGC voltage had to be produced. The dual gate MOSFET and the MC1350 have reverse AGC characteristics, thus an AGC that controls both types of amplifiers has to produce two types of AGC voltage. One voltage increasing and the other  decreasing when signal levels rise in the receiver.

The microphone amplifier was not necessary because an electret microphone outputs enough audio frequency voltage to drive the NE612 mixer directly. An intermediate amplifier with bipolar transistor amplifies between the SSB filter and the TX mixer pushes the signal to an appropriate level, thus enough energy always is present in the first transmitter stages.

The remaining transmitter has been not changed, only the final amplifier transistors have been replaced with a pair of 2SC2078 (2SC1957 in previous version). Transmit power is now 6 watts (when DC is 13.2 volts from my QRP battery package). 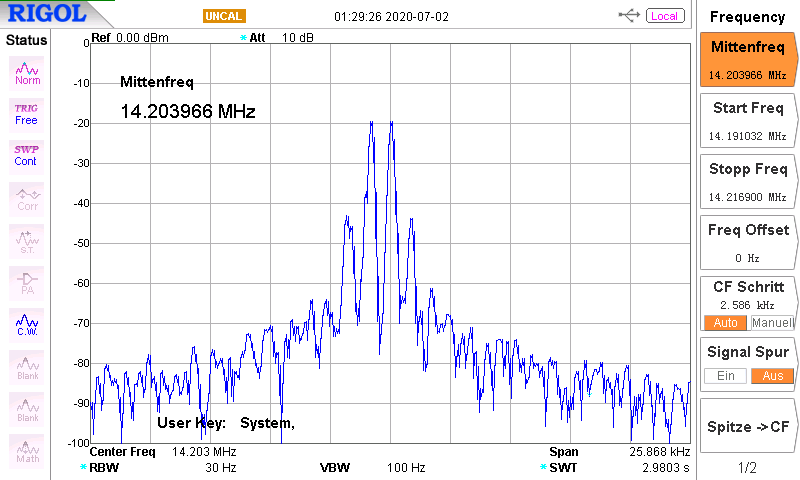 Based on a discussion with WA2MZE here on my blog I tried to minimize physical expansions of a P-channel MOSFET based T/R switch. The basic design can be found here, only two P-channel switching MOSFETs are used.

The circuit is so simple, it fits on a piece of Veroboard just 1 square centimeter in size and put into a piece of heat shrink tubing. After connected to the 12V system it was stored behind the front panel:

The inside has also been straightened (please, don’t say its is still messy! 😉 ):

Under the Si5351 breakout the audio amp is hidden. I think available space has been used to the maximum and component density of the board is OK. 😉

Here a view to the underside where all the small SMD components have been placed:

Times are getting harder because I’m running short in these adhesive letters that are not available today anymore. An alternative had to be found. Initial tests with the so called “toner transfer method” had been frustrating, but I came across the idea to use labels for laser printers that are cheap and allow individual front panel design.

Here the steps in brief to get a first class front panel labeling:

Step 3: Cut the image and work out your front panel. Then enhance the borders of the items you want to label later:

Step 4: Eliminate the background by using the “cut” tool:

Step 5: Put the labels into the right places and later cut out the borders of the items you have just labelled:

Step 6: Now you are nearly ready to print but one step must be done: Measure the size of your front panel and bring the picture exactly to this size. If you are lucky (like I was) the picture is in the correct dimensions defined by my scanner. If you are not, you can copy the picture to a text processing software or another appropriate tool and adjust the size of picture exactly. Make 4 or 5 five copies on the same sheet and print it out with your laser printer.

Step 7: Clean your front board with grain alcohol and fix one copy of the laser print taking the precise  position of the label.

Step 8: Cut the holes and other culverts with a sharp cutter knife or scalpel.

Step 9: Be happy because of having made a top quality front panel!

Like its predecessor the radio has been mounted into a U-shaped frame of aluminum. Height is 3 centimeters, thickness of the sheet metal is 1 mm. The front panel has been attached with angle plates also made from Al and fixed with M2 screws. This makes a rugged mounting frame for the veroboard and the additional mechanical structures like sockets for antenna, DC supply and headphone.

To finish the cabinet, a base and a top cover from 0.5 mm aluminum sheets have been bent exactly. Precision is now improved because I started a new method: Before bending the sheet metal I cut a wooden block using a precise buzz saw. In this case case exactly 74 millimeters wide (7 centimeters from the inside, plus 2×1 millimeters for the thickness of the mounting frame and another 2 millimeters of space you need because of the minimum bending radius that is required for the metal sheet. Using this method the cover exactly fits onto the mounting frame.

So, that’s the story of another revision of my radios. Thanks for watching!