Welcome to my private blog on software and hardware development and radio engineering science. The circuits presented here are free to be used within the amateur community. Commercial exploitation requires permit for usage and modification. If you have any questions, comments or ideas, you may wish to mail me: webmaster[at]dk7ih.de.

Profession: I graduated from college in science (Physics and IT), earned a teaching degree in secondary education and have been working as a science teacher for more than 20 years.  Now I’m back in the field of engineering, research and development. I am self-employed.

After having graduated from college and before starting teaching I worked as a software and hardware developer for about 8 years. Mainly I have been occupied with projects in the field of technique of measurement, sensor interfacing, database development. Also I have been occupied with macro programming for Microsoft products and learning software.

My main language nowadays is the “C” programming language, but  there also were lots of projects in Visual Basic and PASCAL the recent decades. Today all my computer work is in the embedded systems sector (ATMEL AVR microcontrollers) for my private  radio and scuba diving material.

Amateur radio acitvities: Before gaining my radio amateur license in 1987 I have long been a home constructor of radio equipment. Must have been a virus I aquainted from my father who built vacuum tube equipped radios, remote controls for ship models and other radio and electronics related stuff.

By the age of 8 or 9 I started to build simple receivers for medium and short wave. I listened to all the stations from all over the world. Later by accident I found some CBers in my 27 MHz diode receiver and since then I have been hooked to radio frequency communications.

First I started with a simple 2 transistor AM transmitter built on the board of my Philips Electronic experimental kit. For the receiver I used a regenerative technology made genuinely for rc models. My first real contact via a home built radio was down the street where an elderly CBer who called himself “Alpha 1” had his station. Distance must have been 500 meters or so but I was happy he could read me and we could talk via the radio. 😉 The radio was built on a piece of cardboard and from today’s point of view it was some sort of horror trip concerning the design. Proper grounding? Oh, forget it! 😉

Later I built crystal controlled AM CB radios on Veroboards that had more power and was “on air” regularly with them. Always looking out of the window of our flat if there was radio detection car of the Federal Communication Office ’round the corner’. Guess what I did was not 100% legal, or to say more exactly, it was illegal. But who cares nowadays? 😉

When I was about 12 or 13 years old I got interested in “real” ham radio. I pulled tubes out of old radios and started to build short wave transmitters. EF80 was my favourite tube for oscillators, EL84 for the final. A nice circuit that time was a small QRP transmitter for AM equipped with 2 pentodes from the late 70s: 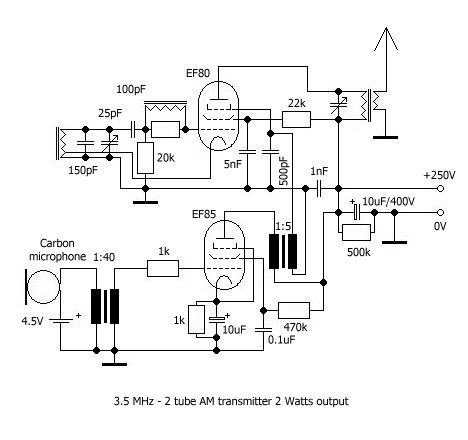 It worked pretty well. A friend of mine was able to receive my signals on 80 meters with a modified kitchen radio over a distance of about 10 kilometers. That was fun! 😉 What my parents did not think to be funny were unexpected “visits” of the local police investigating in the case of illegal transmitting activities and confiscations of several technical things from our household like my mother’s kitchen radio. 😉

Later I re-participated for some years in CB radio again with homemade AM rigs. I used and refined 27-MHz-remote control circuits that I modified for voice communication. I went away from working with tubes because rf-capable transistors were commonly available for reasonable prices. The schematics for the 27-MHz-RC-circuits had been widely published in literature that time (German authors e. g. Heinz Richter or Gerhard O. W. Fischer) because people were allowed to build their own remote controls for ships and aeroplanes under some limited conditions. My father did so, thus all the necessary equipment was available in our home. He even owned an oscilloscope, an older Heathkit one.

Then I finally decided that CB might not be the right field for experimenting and constructing my own radio communications equipment. I made up my mind to learn morse code (which was mandatory in those times to achieve a short wave ham licence) by writing a software to practise with on an old ATARI 600 home computer and afterwards applied and passed the licence exam. I got my license with the first attempt.

Nowadays I don’t use any off-the-shelf equipment except from test equipment. All my HF rigs are homemade. So my main interest in amateur radio is homebrewing SSB transceivers (gave up morse code decades ago, have to admit 😉 ), working with and programming microcontrollers, electronics of all kind. I really love to to construct gear that performs well and looks good. “Ugly construction” is not among my preferred techniques. 😉