The “Lean Design Transceiver” has been a project to build a simplified but effective 100% analog SSB QRP transceiver with minimum effort. The radio worked fine but there is never anything that can not be improved.

So, this transceiver, originally built in 2018, also has been scheduled for a revision. The problems were minor,  mainly on the mechanical side of the design. I have then used a veroboard to connect the front and the rear panel. Later I found this to be inferior under the aspect of ruggedness particularly for a VFO-controlled radio because of problems concerning mechanical stability. Now there is a 2mm aluminum plate carrying the circuit boards which makes the rig much more withstanding to mechanical forces.

Mainly the transmitter section also had to undergo certain changes. The previous version contained a 3-stage amplifier with 4 watts PEP output, I decided to switch to a 4-stage design with about 10 Watts PEP out. To save space for this the new concept the radio has been designed using SMD parts where ever possible.

Last, the basic design using the two NE612 mixers either for receive or transmit mode has been perpetuated. But the switching from RX to TX mode now has been transferred from formerly using two relays for reversing the signal path to one relay changing signals (VFO and LO) at the mixers and simultaneously keeping signal path direction.

The VFO also has been simplified, now it is one oscillator-stage and one buffer amplifier.

Reused have been front and rear panel, cabinet, Vernierdrive and other non-crucial components. 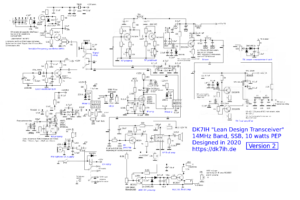 Mixer 1, the SSB-Filter, the IF amplifier and mixer 2 make up the core of the radio. Mixer 1 is either receiver mixer or the double sideband generator (DSB), mixer 2 serves as product detector or transmit mixer. Mixer 1 also has been equipped with a circuit for optimizing carrier suppression. With optimized settings of the LO frequency and the 10k pot carrier in best position carrier suppression will be in the range of 45 to 50 dB.

The newly introduced signal relay supplies the VFO and the LO signals to the appropriate mixer depending on wether the radio is currently in receive or transmit operation. In comparison to the previous design this step saved the use of 1 relay.

The IF amplifier has been integrated into the AGC supply voltage chain. When in receive mode the AGC is variable depending on the input signal from the product detector (as well as the rx preamp stage). Rx gain swing in the range of 50 to 60 dB which can cope even with very strong signals. On transmit there it is always on full AGC voltage supplied to the IF amplifier to ensure maximum transmitter output.

The electret microphone output is high enough, so that (together with the IF amplifier) enough gain is achieved to fully drive the transmitter.

Please note that to avoid excess frequency drift some countermeasures have to be taken in the VFO control stage. As indicted in the schematic a combination of polystyrene and NP0 capacitors has been used. The polystyrene capacitors show a reverse temperature behavior in comparison to the coil so that temperature influences are compensated to a certain degree. After 10 minutes of “warm up” the VFO should be settled and only drift some 50 Hz per hour which is suffice for SSB operation.

The input stage has been more or less the same like in the predecessor of the radio. A simple prefilter circuit with a low Z end (leading to the 50Ohm-antenna) and a high Z end leading to gate 1 of the dual-gate MOSFET transistor.

After that stage a double circuit filter has been applied providing more selectivity for strong out-of-band-signals. Problems related to unwanted in-band signals causing IMD3-problems have never been encountered even when signals levels where high on the 14MHz-band.

To optimize IMD3-performance and output a 4-stage-design has been used. All transistors are bipolar semiconductors stripped from old CB-radios. The spectrum analyzer screen shows the output with 10 watts PEP applied by a two-tone-signal:

Two veroboards (the 1st 6 by 8 cm and the 2nd 3 by 7 centimeters) carry the whole radio. They are seperated by a sheet metal made of aluminum to avoid stray energy from the power amplifier section into the preamplifier stages.

The larger one of the boards (right part of the picture) holds the mixers, SSB-filter, if amplifier, AGC, the receiver section plus the first 3 stages of the transmitter. The smaller board contains the final radio frequency amplifier and the T/R-relay:

It is really surprising what can be done with about 8 to 10 watts PEP in an SSB-signal from such a simple radio. Contacts with all over Europe are performed with high reliability when condx are up (as they currently are). A Moscow-based SDR returned the picture of a two-tone-signal transmitted: 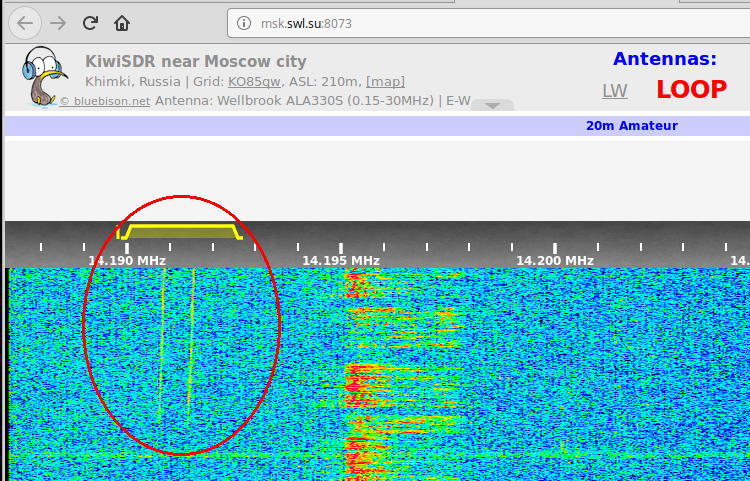 The frequency is slighty drifting upwards due to the fact that warm-up has not been finished yet when the experiment was done.

All in all I have revised another radio optimizing its construction and performance. I think I’m a little bit  “Monsieur jamais content” 😉